Senghenydd Mining Disaster -may it never be forgotten – 10 September 2013 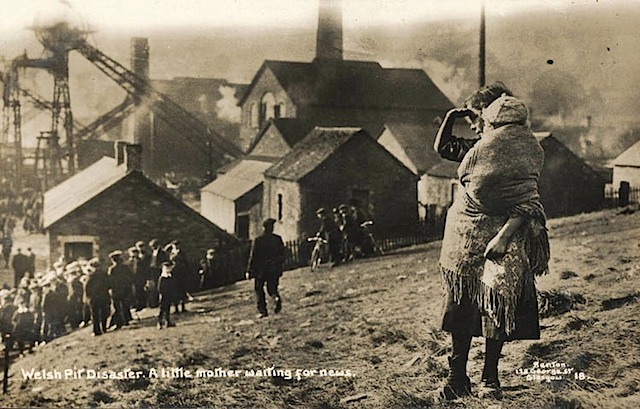 Soon after 8am on Tuesday, 14 October, 1913 a siren was heard in the Aber Valley, near Caerphilly in South Wales. There had been an explosion in the Universal Colliery in Senghenydd. During the following few days it became clear that 439 men and boys had lost their lives. This was to be the worst mining disaster ever to have occurred in Britain.

The scale of this disaster was truly shocking. The newspapers of the time were full of graphic images of the harrowing scenes which showed the bravery of the rescuers, one of whom was killed, as well as the pitiful sorrow of those who had lost loved ones.

Soon after, there was an inquiry into the causes of the disaster. The inquiry found that the owners and the managers of the mine were culpable. But when fines were levied, the manager of the colliery was fined £24 and the owners, the Universal Steam Coal Company, (a subsidiary of Lewis Merthyr Consolidated Collieries) were fined a mere £10. There was derisory compensation of only a few pence paid to the families of those who had been killed. All of this was despite the fact that Lewis Merthyr were a highly profitable company doing extremely well in the boom years of the coal industry.

What made the lack of justice all the more acute was the huge loss of life in 1913 could have been avoided. In 1901 there had been another explosion at the Senghenydd Colliery and on this occasion 81 men had lost their lives. The inquiry which followed that explosion had pinpointed its cause – an electrical spark which ignited methane gas which, in turn, caused coal dust to rise and which then also exploded.

In 1901 it was recognised that the impact of such explosions could be substantially reduced if certain measures were taken. As a direct result, legislation was brought forward placing a statutory responsibility on coal owners to introduce electrical equipment to prevent sparking, to ensure that there was watering of dusty places and to take responsibility for the installation of reversible fans to provide clean air. In Senghenydd, the owners had delayed the introduction of these measures on the grounds of ‘cost’. If the owners had complied with the law, then the likelihood is that the disaster of 1913 would not have occurred.

After the Second World War there were improvements in industrial health and safety and the 1974 Health and Safety at Work Act was a milestone in improving safety at the workplace. Recently, there has been a concerted attempt by the Conservative-led Government to undermine and even deride health and safety.

All too often we hear jibes about regulations which ‘interfere’ in the workplace and undermine the profitability of companies. The truth is that today, as in the past, good health and safety standards are always important for workers, and that it is morally wrong for businesses to make profit at the expense of the wellbeing of their workforce.

With the reduction in the number of health and safety inspectors and inspections, and the Government’s creation of a climate that downplays the importance of health and safety, there are worrying signs that the improvements of the past are being eroded. For example, the TUC has indicated that the number of construction workers falling from height has recently increased by 60%. Also in construction, injuries caused while lifting, carrying and handling have increased by 37%.

In both the private and public sectors there are worrying trends that attempts are being made to cut costs by cutting workers’ protection. While the fatalities in industry, thankfully, continue to show a steady decline, it is nevertheless the case that the ‘reporting’ of accidents has declined, just as the failure to recognise injuries associated with white collar work has become more pronounced.

On Monday 14 October this year, the people of Senghenydd will mark the centenary of the Senghenydd explosion. Over the past year or so local people have been organising a host of fund-raising events and have commissioned an impressive memorial to all those who have lost their lives in the coal industry in Senghenydd, Wales and throughout the United Kingdom.

The efforts of local people have demonstrated clearly that despite the demise of the coal industry and the failure to provide alternative employment, there is an impressive community resilience in Senghenydd, and indeed in many other communities like it throughout the South Wales Valleys.

This article was written for the Morning Star.