The centenary of the Senghenydd Mining Disaster – 14 October 2013 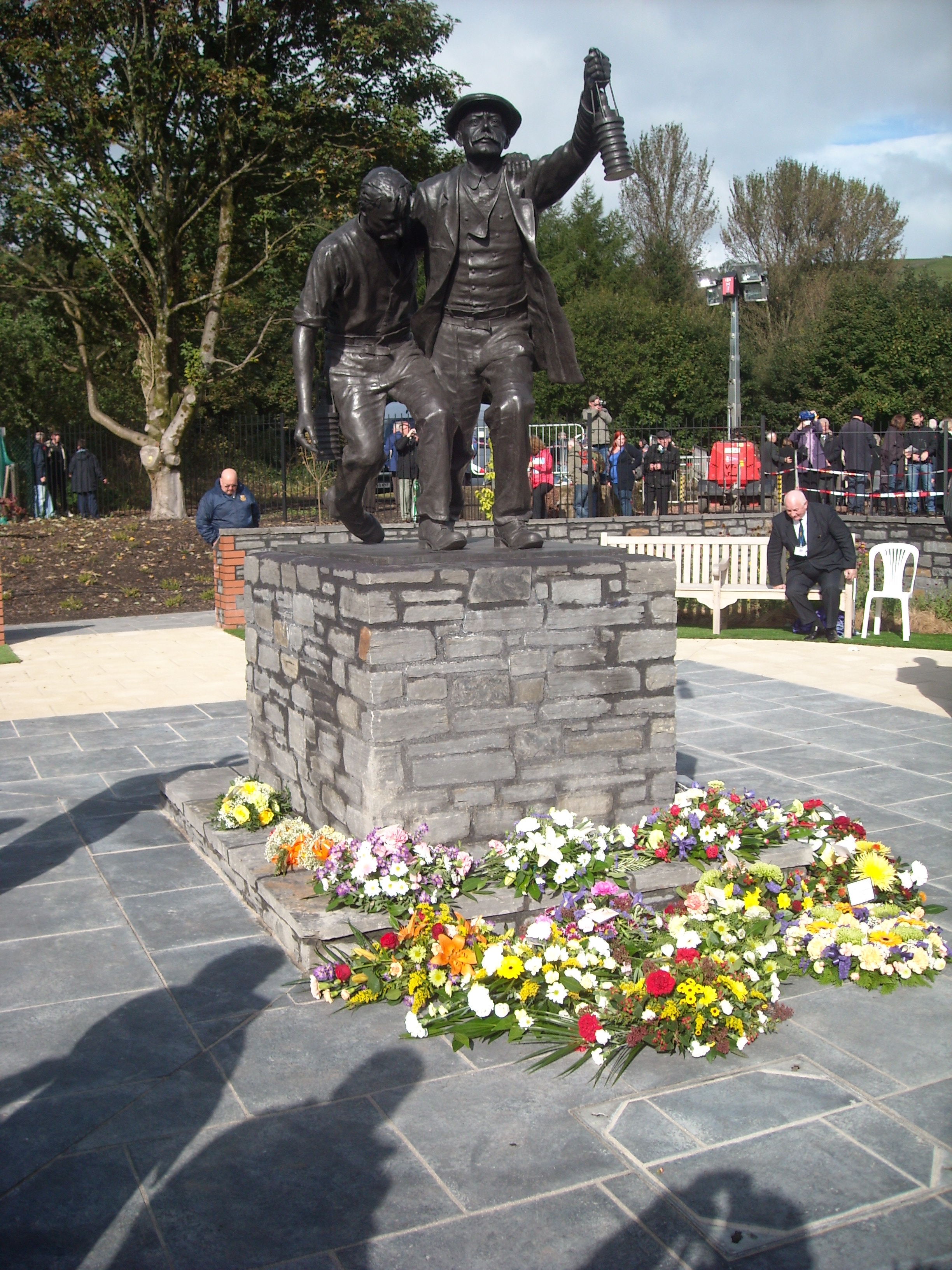 Senghenydd is a small, former mining village at the very top of the Aber Valley, near Caerphilly in South Wales.  Today, its features are similar to those of many former mining communities throughout South Wales.

Sadly however what makes the village stand-out is the fact that in October 1913 it experienced the worst mining disaster in British history.

On the morning of Tuesday 14 October 1913 there was a huge explosion in the local Universal Colliery.  At 8.00am a siren alerted the people of the valley that something terrible had happened.  At that moment, few could have imagined the scale of the tragedy which was to unfold. 440 men and boys were to lose their lives.

Journalists flocked to South Wales and the national newspapers carried photographs of the valiant efforts of the rescuers, one of whom lost his life in his attempt to save trapped miners.  There were also telling photographs of the sorrow of young families as the enormity of what had happened began to sink in.

A few months after the explosion, an inquiry was held.  It seemed likely that the explosion at the Universal Colliery had been caused by an electrical spark igniting methane gas.  Because the colliery was particularly dusty, coal dust then “fuelled” the explosion with terrible consequences.

Remarkably, the causes of the explosion were very similar to those which had caused an almost identical explosion at the same colliery in 1901.  Then 81 miners had lost their lives.

After that explosion there had also been an inquiry.  This inquiry had pin-pointed the causes of the disaster and significantly had prepared the way for the Coal Mines Act of 1911.  This Act was to introduce basic safety measures.  Because of this legislation, coal mine owners were obliged to water down dusty areas and introduce electrical equipment which would prevent sparking.  The owners also had to install reversible fans to ensure clean air.

In the heady days leading up to the First World War, coal from South Wales was in great demand.  As a result, the owners of the Universal Colliery, Lewis Merthyr Consolidated Collieries, were enjoying huge profits.  And yet, the owners had failed to introduce the safety measures which they were obliged to, on the grounds of cost.  They had argued that they needed more time to implement the provisions of the Act and so at the time of the second explosion, the company had not implemented all the safety measures required.  This was made clear at the second inquiry and there is little doubt that if the measures had been introduced the explosion of 1913 could have been averted.

Nevertheless, the company was fined just £10, while the manager of the colliery was fined £24.  Adding further insult, the compensation paid to the families of the deceased amounted to only a few pennies per family.

To mark the centenary of the disaster, the community of Senghenydd has pulled together to raise funds for an impressive memorial.  This will be located near the entrance to the former colliery.

To mark the centenary and to raise funds, a wide variety of events have been organised over the past few months.  These have included concerts by the Aber Valley Male Voice Choir, one of the finest in Wales, a miners’ reunion with the excellent Welsh comedian Owen Money, and a traditional Gymanfa Ganu (singing festival) in one of the valley’s many Chapels.

The local Salvation Army, the Women’s Institute, and the Mothers’ Union have all joined in, as has the Annual Community Arts Festival.

Like many other former mining communities in South Wales, Senghenydd has seen better times.  Following the demise of the coal industry in the Aber Valley, little alternative employment has been brought to the valley.  As a consequence, most people who secure employment commute some distance to work but unemployment and ‘economic inactivity’ remain stubbornly high.

Despite the economic and social problems, the village still has an impressive resilience and a strong sense of community.  This has found tangible expression in the collective efforts which have raised over £350,000 for the memorial.

All credit to the people of Senghenydd for organising such an important memorial.  The memorial will say as much about the vitally of Senghenydd today, as it does about the harrowing events of 100 years ago.

This article was written for Tribune.