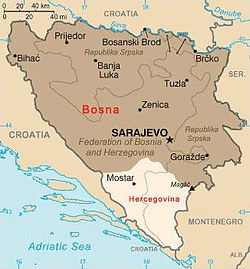 A few weeks ago, I went on an overseas visit with Parliament.  Before anyone starts assuming that this was some kind of jolly, the visit was to Bosnia.

In the early 1990s, you will recall that Bosnia experienced the most horrific Civil War imaginable.  Mass murder, ethnic cleansing, systematic rape, concentration camps – all happened in Bosnia.

After much prevarication, the international community eventually intervened, stopped the war and imposed a peace settlement.  That settlement – the Dayton Agreement – still holds.  But although it stopped the war, it has not created a genuine peace.

Today, Bosnia is a frozen conflict: There is no war but neither is there a real peace.  The three ethnic communities of Serbs, Croats and Bosniaks (Muslims), still live in segregated communities and there has been no genuine attempt to bridge the huge divides between them.  Even individual schools have separate classes for the different groups and some towns have paralysed local administrations because the politicians representing the groups will not even talk to each other, let alone work together.

The basic problem is that the Dayton Agreement gives a veto to every ethnic group over virtually everything.  The result is that everything gets vetoed and nothing gets done.

I am pleased to say that the international community now recognises that this cannot continue and there will have to be change.  The big question is however how to bring about that change.  The significant international financial support which Bosnia receives is key.

You may think that this has got nothing to do with us.  But just remember when we commemorate the start of the First World War next year that the worst war the world has ever seen began in Sarajevo, the capital of Bosnia.