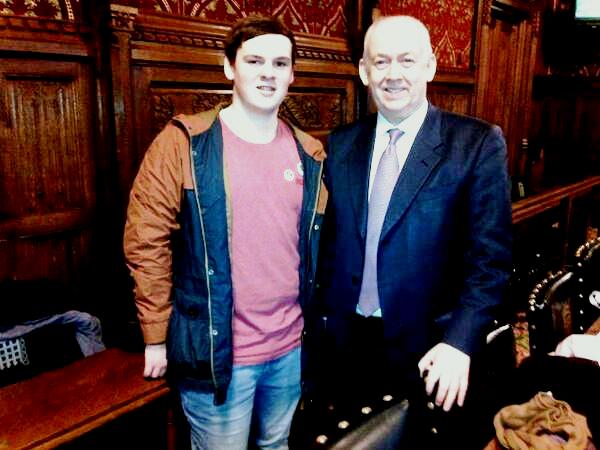 Wayne David, Labour MP for Caerphilly, has met with Joel Price from Hengoed and backed his campaign for 16 and 17 year olds to be given the vote.

Mr David met with Joel as he took part in a lobby of Parliament that had been organised by the campaign group Votes at 16.

Currently, 16 year olds in Wales can leave school, get a job, pay taxes, become a director of a company, get married, change their name by deed poll, consent to medical treatment or even join the armed forces.

If Labour wins next year’s general election, the Party has said it will change the law by introducing legislation to allow 16 and 17 year olds the vote in general and local elections.

The Welsh Assembly also supports giving 16 year olds the vote. In July 2012, AMs backed a motion calling on the UK Government to reduce the voting age to 16.

Today’s lobby of Parliament followed on from the first ever National Voter Registration Day in the UK last week, encouraging more young people to register to vote.

Speaking after meeting Joel, Wayne David said, “I was delighted to meet Joel Price and give my full support to the Votes at 16 campaign. The evidence clearly shows that the earlier people get engaged with the politics the more likely they are to vote in future elections.

“By giving 16 and 17 year olds the vote, along with strengthened citizenship education, it will not only empower young people, but it will also make politicians, both locally and nationally, listen more to them and their concerns”.