The MP who opposed the First World War 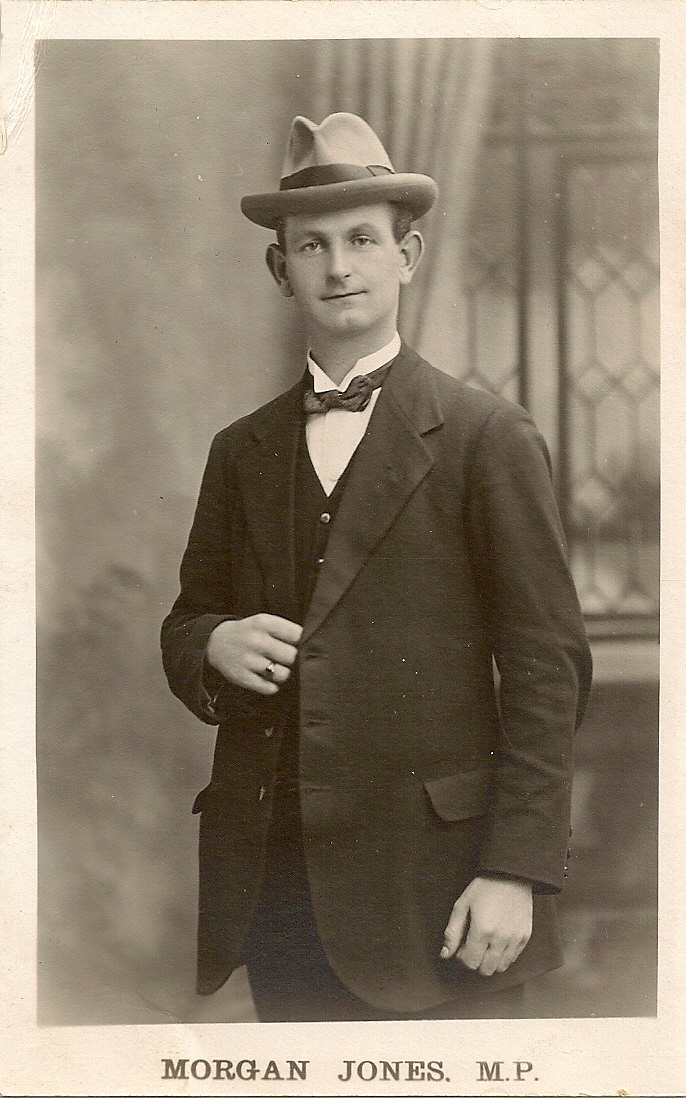 Morgan Jones was born in 1885 in Gelligaer in the Rhymney Valley. He was born into a Welsh speaking, non-conformist family and attended local schools before going onto Reading University. Morgan Jones returned to the Rhymney Valley, became a school teacher and, as a convinced socialist, established a local branch of the Independent Labour Party (ILP). Soon after he was elected to his local council.

When Britain entered the First World War in August 1914 jingoism swept across the South Wales Valleys. But one of the foremost opponents of the war was Morgan Jones of Bargoed. Once war broke out, Morgan Jones travelled across South Wales urging opposition to the war.

Morgan Jones was a Christian pacifist and believed that all war was morally wrong. He also saw the war as a clash between the ruling elites of nation states and argued that working people should play no part in the conflict.
By the end of 1915, with the casualties mounting, it was clear that Britain’s war effort could not be sustained by volunteers alone. Therefore, in January 1916 conscription was introduced. As a consequence, the opponents of the war had to face the state machinery which the Government established.

Key to the Government’s approach was the structure of Tribunals and Morgan Jones was summoned to appear before his local Tribunal, which was made up mainly of his fellow councillors. He argued passionately against the war on moral and political grounds and the Tribunal recognised the sincerity of his case. Their judgement was that he should be recognised as a conscientious objector (CO), but they insisted he had to accept alternative work.
This, Morgan Jones was not prepared to do. He believed that to accept ‘work’ which contributed to the war effort meant compromising his anti-war views.

As a result, Morgan Jones spent the best part of the next 12 months in Cardiff Gaol, Kinmel Park Army Camp in North Wales and Wormwood Scrubs. In the ‘Scrubs’ especially, conditions were extremely harsh. Like other COs, Morgan Jones endured long periods of solitary confinement and subsisted on a diet of bread and water. At the same time, Morgan suffered huge personal abuse from the wardens.

Towards the end of 1916 Morgan Jones’ health broke. He had never been a strong man and the strain of being incarcerated in the awful conditions of Wormwood Scrubs took its toll. Having suffered a nervous breakdown and becoming increasingly weaker physically, Morgan Jones rationalised his stand as a conscientious objector. He now questioned the logic of being an objector to the war while refusing to accept alternative work. Morgan Jones now came to the view that what was important was continued opposition to the war and not COs’ views on alternative work.

As a consequence of both his deteriorating health and his change of mind, Morgan Jones was transferred to a Home Office Work Centre in Warwick. Here he remained until the end of 1917.
But upon his release from the Work Centre, Morgan Jones did not end his agitational work. He again addressed meetings throughout South Wales and even after the war had ended, Morgan Jones found himself before the local magistrates’ court and once again being sent to an army camp.

Eventually, Morgan Jones was released and, as a qualified teacher, he hoped to return to school teaching. Because of his conscientious objection to the war, however, this proved impossible and Morgan Jones had no choice but to become a labourer in a local colliery.

The First World War left a huge and deep scar on the country and when the soldiers returned home they did not find a ‘land fit for heroes’. Instead they found growing unemployment and unprecedented social hardship.
In such a climate, there was a growing militancy amongst many working people and it was in this fevered atmosphere that the Caerphilly constituency faced a Parliamentary by-election.

In July 1921 the pro-war Labour MP for Caerphilly died. The local miners’ leaders moved quickly and lined-up their favoured son to be the miners’ nominee. But to their surprise a non-miner, Morgan Jones, won the support of the majority of miners in the ballot for the Labour nomination and with their support Morgan Jones became the Labour candidate.

In the by-election which followed, Morgan Jones’ opponents were the Liberal/Tory Coalition Government candidate and, for the first time, a Communist Party candidate. Morgan Jones won the by-election comfortably. Both those who had supported the war as well as those who had opposed it, came together to support a man who was determined to ensure that the country would never face such a war again. Morgan Jones became the first conscientious objector to be elected to Parliament. His commitment and sacrifice should be remembered.