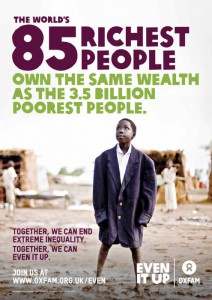 More than any other time of year, Christmas and the New Year is a time to think of family, friends and those less fortunate than ourselves.

The festive season should be a time to think about the Christian message and care about others.  I believe this means we must not only spare a thought for but also help the less well-off.

When I was driving down from the House of Commons to South Wales the other day, I was struck by an Oxfam poster which declared that “across the world the 85 richest individuals own as much wealth as the 3.5 billion poorest”.

This is an amazing set of statistics and shows that more than at any other time in human history, the gap between rich and poor is truly immense.

Such a gap is unfair and means that poor people across the globe live in poverty while a small number of extremely rich people live in opulent luxury.  Not only is this the case in far flung lands, but it is also the case in Britain too.

So, when we are making our New Year’s resolutions, I think we ought to commit ourselves to helping those less fortunate that ourselves in Britain and throughout the world.  The old saying is that ‘charity begins at home’.  This is true but it mustn’t end at home.  Human beings are human beings, wherever they live or whatever the colour of their skin.  I think we all should remember this, especially during the festive season.

This article was written for The Rhymney Valley Express.