The importance of remembrance 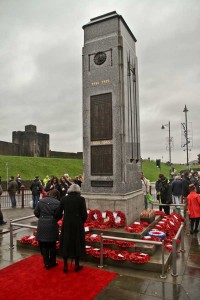 Every November, it is wonderful to see how the various communities of the Caerphilly Borough come together to remember and honour those who made the ultimate sacrifice in defence of our freedom. This year was no different. Thousands of people -; young and old -; paid tribute throughout the length and breadth of the Rhymney Valley, as they did throughout the country.

On the Friday before Remembrance Sunday I participated in a service organised by local Caerphilly school children. Then, on the following Wednesday, I visited Ty’n Y Wern Primary School in Trethomas. Here, there was a moving ceremony at the new Memorial Garden where the children placed small wooden crosses, each with a name of a local serviceman who had died in either the First or Second World Wars.

The service at Ty’n Y Wern concluded with local Councillor Liz Aldworth movingly thanking the pupils and staff at the school and the many parents who attended.

In between these two children’s services, on Remembrance Sunday I attended two services; one in Ystrad Fawr, near Ystrad Mynach and the other in Caerphilly. Both were well attended and extremely moving.

One of the ways in which the services of Remembrance are made poignant is the recollection of individual stories of sacrifice and bravery. It is these stories which bring home the reality of the sheer horror of war, but also remind us of the selflessness of so many who have gone before us.

Amongst those who made the ultimate sacrifice in the Great War was William Clifford Harris. He was a teacher at Cwmaber Boys School, Abertridwr. Some 15,000 school teachers fought in the First World War, but William Harris was the first teacher from Glamorgan to die on active service. He lost his life in France in January 1916 at the age of just 21.

Sadly, there were many more from Caerphilly who lost their lives in the Great War and in other more recent conflicts. At a time when our freedom and liberty are under attack once again, it is more important than perhaps ever before to remember those who died defending our country and its democracy.